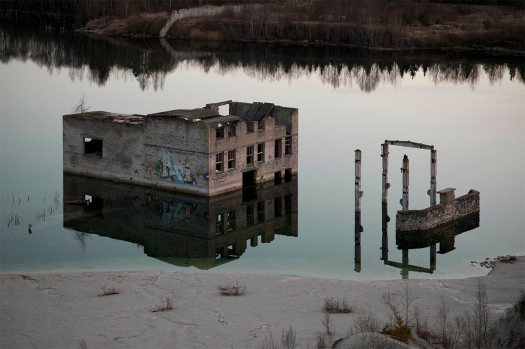 Rummu is located in the Vasalemma Parish of northern Estonia, around an hour’s drive from Tallinn, the country’s largest city and its capital.

We came across Rummu quite by accident, but instantly felt that this was an ideal place on which to base a Second Life sim. It was the location of a quarry from the 1930s until the early 1990s. More notoriously, Rummu was the site of a Soviet prison, whose inmates formed the majority of the quarry’s workforce. Rummu prison – also known as Murru prison, which was situated close by and eventually merged with Rummu – has a dark history: known and widely feared for its abuses of prisoners, little of that history is documented today, although various references to human rights violations at Murru can be found on the US Department of State website. Rummu quarry was essentially a labour camp in which prisoners were forced to work and to endure brutal treatment from guards who barely spoke their language.

After Rummu prison was closed following the collapse of the Soviet Union, the quarry ceased operating. The site was flooded and another remarkable story began. The prison itself now lay hidden beneath a lake that slowly became a well-known Estonian beauty spot, drawing many visitors who wanted to swim and dive in its crystal clear waters. In summer, this place resembles a city beach, packed with bathers. 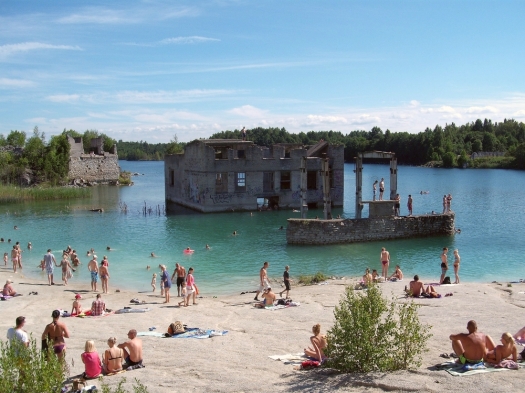 As one commenter said under a YouTube posting of a video taken at Rummu, one might describe this is a story of “how hell became heaven with love …”

At present, Rummu quarry is officially closed, and swimming is outlawed – and yet still visitors come, sneaking in past security gates.

There are many good articles and blogs about Rummu, with some excellent photographs that we relied on when making the sim – see for example here, here, here and here. Rummu also features as a backdrop in the video for Alan Walker’s Faded …

… and in Einar Kusk’s short post-apocalyptic film, The Most Beautiful Day (2015) …

We were drawn to the place by its contrasts: between past and present, between what lies above and below the water, between freedom and captivity, between beauty and brutality. We also liked Rummu’s bohemian vibe: there is something carefree and illicit in the way that visitors use it, painting murals on the walls of the buildings one can see, and staging impromptu parties and music events. I imagine that most of us know of places like this, with their mix of beauty and squalor, and understand how seductive they can be. 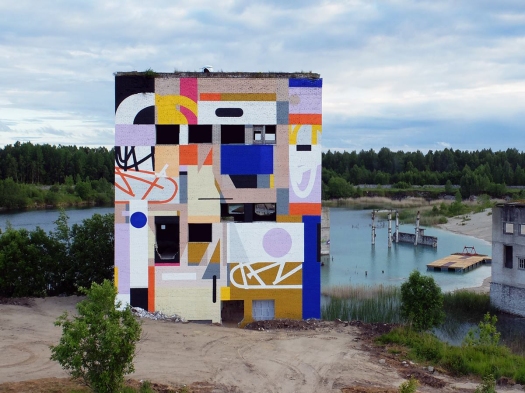 Rummu can still be a dangerous place. The lake is deep, the ground falls away quickly, and is full of bits of broken rubble and barbed wire that will cut careless swimmers or any paddlers without shoes. For those choosing to dive from one of the derelict buildings above water, there is the ever-present danger of colliding with something in the water, and there have been a number of deaths and injuries in recent years as a result. Nevertheless, the swimmers still swim, and the divers still dive.

A large part of the attraction of Rummu is the knowledge that beneath these waters stands the old prison, which – fortunately for us – has been regularly filmed by divers.

Those who visit Rummu and write about the experience invariably say that besides the strange beauty of the derelict buildings that lie partially submerged, it is the knowledge of what lies below the water – and the terrible history of the prison itself – that lends the place its extraordinary charisma. We have tried to recreate this combination of surface and depth. If you venture into the water and walk around, you will soon find yourself in darkness, surrounded by plants and pieces of derelict building. Keep on going down the slope, and in the depths you will reach some gates. Here you enter the prison itself, deep under the water, just as divers do today. It’s a creepy place, for sure.

Above ground, Rummu’s most striking feature consists of the giant slag heaps that were created by quarry works.  These act as a great vantage point, while in the real place, they have to be crossed to gain access to the beach.

Besides the ruined buildings and underwater prison, Rummu’s other distinctive feature are its murals, and we have recreated some of these – while adding others – at the sim. The biggest murals, most notably the image of the coffee cup, which exists at Rummu, appear to be the work of a Moscow-based group of artists called Zukclub. Looking through the group’s website, Rummu’s derelict buildings were once used as a ‘street art gallery’ for a show called Past Future Perfect Continuous, and we have recreated this concept at the sim.

A music festival – Moonland – was planned at Rummu during August 2018, but it was cancelled when its financial backers withdrew. At present, a degree of uncertainty hovers over the place, as the site’s owners appear to be building a technology park there. We will see how that turns out …