In building Furillen City, we essentially wanted to create a city that:

Given these aims, and having tried a number of different ideas, we came up a Furillen City that is very loosely inspired by two iconic cities from the DC Comics series, Batman – Gotham and Arkham.

(There is also a Gothem – note the ‘e’ – in Gotland, the island on which the real Furillen is located – and I can definitely say that our city has no connection with it!)

We have not tried to replicate the exact look of the batman cities, partly because this would involve using high-rise buildings that are both difficult to find and almost impossible to use convincingly within the parameters of a Second Life sim, and also because there is no ‘one’ cityscape one can associate with Gotham or Arkham. Having looked at various series of comics that feature both cities, and studied images from the movies as well as the television series, one can represent the city – from the warehouses to the factories and squares, the houses and Wayne Manor itself, through to iconic buildings such as Monarch Theatre (a cinema in the movies, more of an opera house in our version), Gotham National Bank, Trident Intercontinental Shipping, the Iceberg Lounge, the My Alibi bar, the Batcave, Harvey Dent’s HQ, Arkham Asylum, Joker’s Funland, Sionis Industries, and so on – in a number of different ways. If there is an aesthetic that runs through most of the representations, it would probably be Art Deco, but this usually gets mixed up with Steampunk, Gothic and plain old urban grunge.

The city we came up with features some of the places one would expect to find in any Batman-inspired city, together with other bits and pieces we felt might work well, such as Robinson Park, Glucose Park, the museums, movie studios, and so on. Many of the street names are also Batman-inspired. 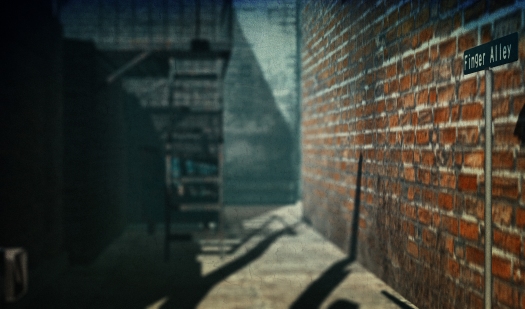 For example, Finger Alley is not – as some visitors have commented (!) – a reference to sexual shenanigans that might take place there, but a tribute to Bill Finger, co-creator of Batman. Likewise Kane bridge references Bob Kane (the other co-creator), while Joe Chill Street (appropriately, where the courthouse is located) is a reference to the guy who killed Bruce Wayne’s parents, Thomas and Martha Wayne, in Detective Comics #33, originally published in November 1939. You can also find The Cat Mews (loose reference to Selina Kyle’s place, which is right there, full of cats), Poison Ivy, the alleyway just behind The Cat Mews, Burton Boulevard (after Tim, of course), Carmine Place (named after Carmine ‘The Roman’ Falcon, Gotham’s Mafia chief), Metropolis Street (Metropolis is a city in close proximity to Gotham), 1st Street (the Harvey Dent HQ), Sprang Way (after Dick Sprang, the great Batman illustrator), Klein Place (after Todd Klein, the comic book letterer who worked on a number of Batman series for DC), Wayne Avenue (named after Bruce Wayne himself, of course), and Riddler Road (named after Guess Who?). We have even created Robinson Park – complete with kids’ fairground rides – as a tribute to Lenny B. Robinson, the Batman impersonator who visited children’s hospitals as an entertainer and became famous when a video of him being pulled over by police in his batmobile went viral …

As for the layout of the city, we began with the Manor and Gotham Square, with the Batcave under the former and the main civic buildings clustered around the latter.

We then developed zones, more or less as follows:

While we would have built further outwards if we could, one advantage of building in the sky is that is makes subterranean building very straightforward … so we added the following underground builds, many of which are interconnected by tunnels:

Here are the maps:

No doubt we will be updating the city as we discover what works and what doesn’t, find new buildings and have new ideas we think would work well … and / or we get bored!

One final note: we did not use a cityscape sim surround. As much as these can create that ‘closed in’ feel of being within a larger city, they standardise the look of places (this is a common problem in SL with rural sim surrounds, too – how many sims do you see using the Dolina surround, lovely as it is?), they can interact badly with alpha textures, and make custom light settings difficult to manage.