The new sim has been attracting around 350-400 visitors per day, and as the guestbook comments suggest, it is being well received. Please do sign the guestbook, your entries are really appreciated and will be published here. You will find the book in the warehouse, top floor bar, right here …

It will come as no surprise when I say that some spectacular images are being made at the sim and posted on the flickr group. Here are some of the highlights … 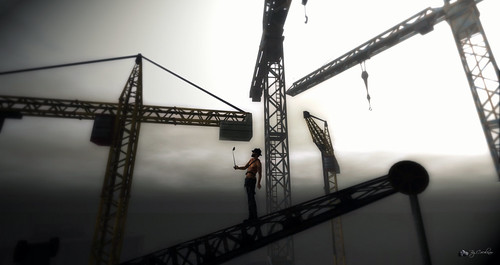 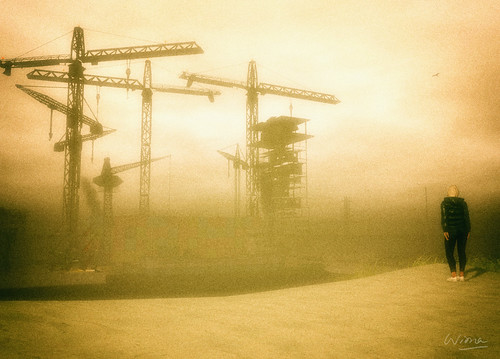 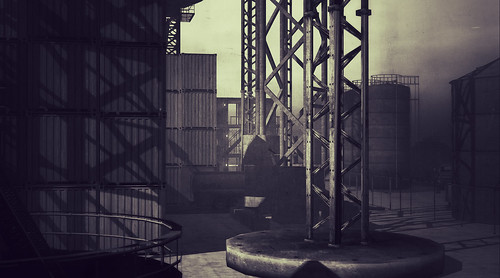 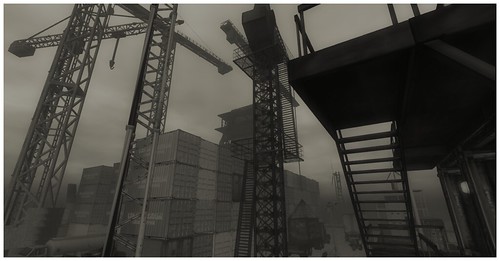 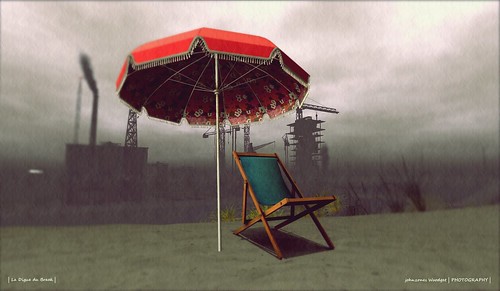 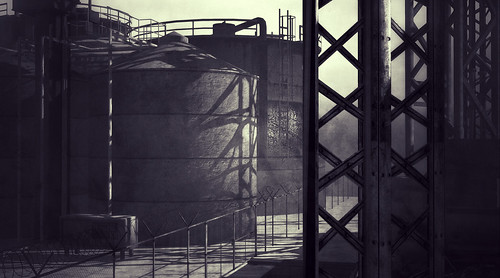 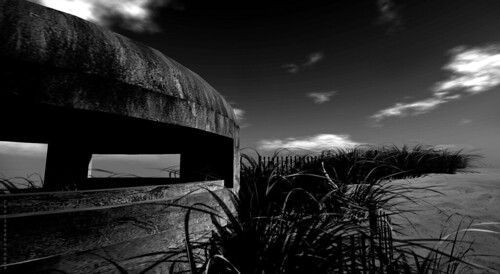 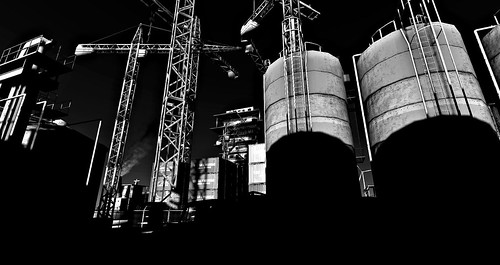 Incidentally, just in case you were wondering, Furillen is still fairly busy, with around 100-150 visitors each day, many of whom see the sim as their Second Life home. I see plenty of people using both sims a lot, which is no surprise and very welcome. Donations are equally welcome, although not compulsory and – unlike some sims in Second Life – we do not charge a membership fee.

I find the contrasting styles of pictures that emerge from each sim really fascinating. These things evolve, of course, but while La Digue du Braek is drawing out some fantastically gritty images from the industrial side along with beautiful landscapes from the beach – and plenty depicting the tension between these aspects of the sim – the best pictures from Furillen still tend towards the kind of minimalism that has distinguished this group on flickr from the outset.

So … just to show that it won’t be outdone, here are some of my favourite pictures recently taken at Furillen … 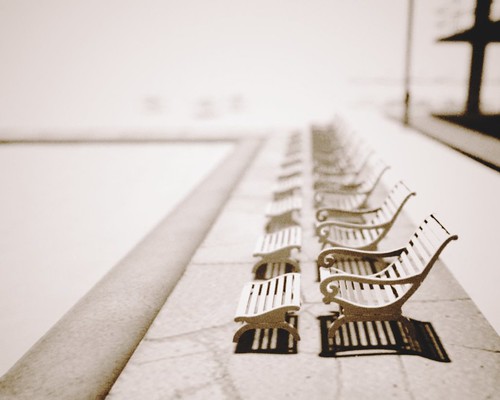 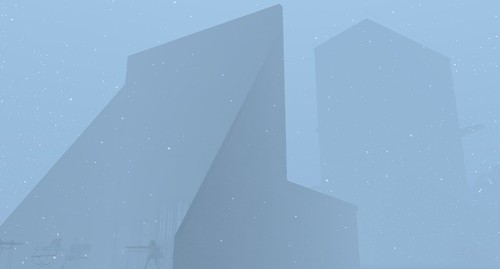 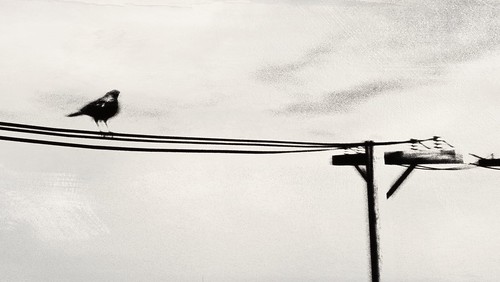 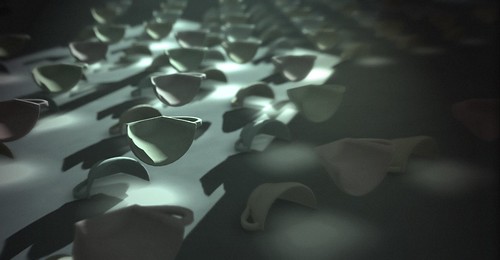 So we had our evening of funk at Furillen. The playlist – put together in consultation with Micky and Vallys – was awesome, with almost five hours’ worth of classics, from Earth, Wind Fire’s September …

… through It’s Raining Men by the Weather Girls …

Besides great tunes, we installed a fabulous dance floor … 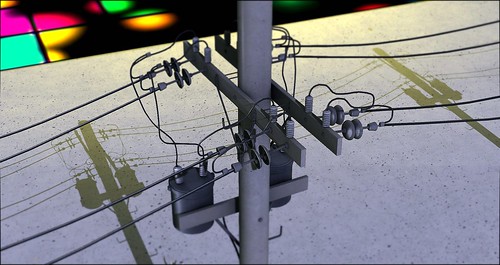 … and there were some terrific outfits … 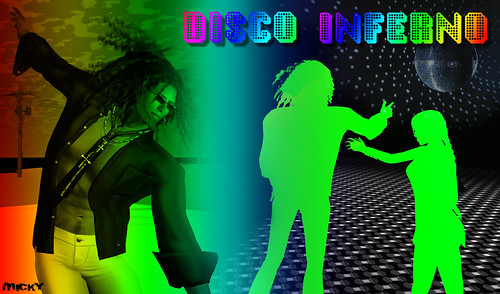 Our resident video artist, Dooozy, was there, not only making sure we had the funniest dances, but recording a movie of the event, which she’ll be working on this week.

I love this music, and had great fun putting the playlist together. So if anyone wants a repeat later this Spring…

Meanwhile, our plans include …

No doubt that last point will provoke some extreme reactions, from …

On that note, I wanted to share something that intrigued and (ever so slightly) disturbed me this week.

I was having a ‘debate’ with someone who was being disruptive on the sim, who told me that I should be ‘grateful for his custom’.

Yes you heard it right.

‘Sim owners like you should be grateful for my custom’.

That’s what he said. Verbatim.

I don’t know what he’d bought either, and I can tell you for certain that he hadn’t made a donation.

But even if he had, his behaviour was in breach of Furillen’s one and only rule …

Which only leaves me to share the best joke I heard this week. It’s slightly non-PC, so please look away now if you’re squeamish that way.

It was about the dyslexic who walked into a bra …

While preparing for the upcoming Furillen @ Radiohead Weekend, it was inevitable that I would eventually find myself ruminating on what it means to be a geek. And/or a nerd.

… you obviously have some geek issues going on. Especially when you get really pissed because you can’t find the exact same font.

As I said yesterday, there seems to be something about Radiohead that invites geekishness.

To test the theory, I  turned to the totally unscientific method of trying out Google autocomplete – and if you’re interested in how this actually works, go here.

… which intrigued me because I didn’t get geek.

And then I realised that I don’t actually know – for sure – what the difference is between a geek and a nerd.

According to this page, a geek is obsessively knowledgeable about a particular topic – but crucially, they also tend to be quite social.

A geek may enjoy board games, film (and may follow directors, composers, or key grips obsessively), tech gadgets, hacking, and techno music. They have their fascination in what makes them unique, but you probably wouldn’t know of their geekitude unless they told you about it.

A nerd is also super knowledgeable, but according to this wiki page on the subject – written, by a geek, surely! – the nerd lacks social skills.

many nerds are described as being shy, quirky, and unattractive.

To be fair, the wiki page on geeks also mentions social skills when referring to …

… the general pejorative meaning of [geek as] a “peculiar person, especially one who is perceived to be overly intellectual, unfashionable, or socially awkward”.

This kind of exercise can easily send us going around in circles. But on the whole, it seems fair to conclude that geeks are always techie and can often be cool, while nerds – generically – are not necessarily techie and not so much cool as just plain funny.

So while this page on how to be both smart and cool ends by concluding – more or less – ‘just don’t be a nerd, asshole’ … you will find plenty of material out there about why geek is the new cool.

So where does that leave Radiohead? Well here it gets a little bit deeper, because Thom was – by all accounts – something of a nerd himself at school. You’ll find plenty of material out there about Thom’s ‘small man syndrome’ – and about his wonky eye.

Not that he cares these days …

Being something of a lazy geek-nerd myself, I have read just one book about Radiohead. It was written by someone who knew Thom at university and it starts by describing his genuine shock on seeing this awkward, weird guy from his younger days being elevated to the status of the world’s coolest cat.

I am focusing on the shock here, not on the cool.

… and you begin to understand how this band might appeal to geeks – and/or nerds – in ways that only their therapists – or Nietzsche, perhaps – would understand.

Joking aside, I’m not sure that Radiohead fans are more geeky – or nerdy – than any other group of dedicated music fans. Sure, you need to be smart to ‘get’ them … but you could say that about quite a few bands.

Bowie – the man from planet geek?

No, I don’t think so either.

But wait! … the Bowie reference is a dead give away. He was ‘weird’ too. He stood out at school, and was so ‘annoying’ that someone hit him when he was just 14 – so hard that it damaged his left eye permanently.

There is beautiful weird. Bowie.

And there is creepy weird. Yorke.

Or to put it in another way. Bowie gave us …

a starman waiting in the sky
He’d like to come and meet us
But he thinks he’d blow our minds.

When you were here before,
Couldn’t look you in the eye,
You’re just like an angel,
Your skin makes me cry,
You float like a feather,
In a beautiful world,
I wish I was special,
You’re so fucking special.

Perhaps it’s this career-defining song, and the techno-dystopian themes of OK Computer! – that have fed the more general association between Radiohead, techie-geekish-nerdiness and pretentiousness.

So blame it on Creep. What Radiohead did with that song was to celebrate the kind of weirdness that – like the weirdness of the nerd – easily leads to low self-esteem.

And they turned it into an art-form.

In writing this song – the very song that made them super-famous – they showed how you could be so uncool that it was, well, cool ….

No wonder they hate playing it now.

True Abba fans – and I know that one or two read this blog every day – will immediately recognise the line in the title of this post. It’s from ‘I Have a Dream’.

Not, I am relieved to say, that great 1963 speech by Martin Luther King – which ends, Thank God Almighty, we are free at last …

… their lyrics, too, often sound so ‘wrong’ that they come almost the whole way back to ‘right’. If you don’t believe me, try singing along to …

It was like shooting a sitting duck
A little small talk, a smile and baby I was stuck …

My my, at Waterloo Napoleon did surrender
Oh yeah, and I have met my destiny in quite a similar way …

… from the epoch-making “Waterloo” .

I should hasten to add that I was quite the Abba fan myself back then. I played the songs, watched the movie, wore the badges and fancied the blonde to bits. So take my references to their terrible clothes and bad lyrics less as satire than as someone trying – and doubtless failing – to exorcise a few teenage demons.

We all have them. Mine just happen to be dressed in spandex …

Incidentally, if you do some digging you’ll find a claim – commonplace now – that Abba dressed like that in order to avoid tax. How did that work? Well, clothes worn by performers were tax deductible if you could prove that they weren’t also being used for daily wear.

But surely there must have been more tasteful ways of exploiting a tax loophole? Such as …

But seriously, I adore many of Abba’s songs – top tip: treat them like Italian opera, ignore the words and focus on the tunes – and have been to see Mamma Mia in London and absolutely loved it.

So when “Dancing Queen” comes blasting through the Furillen music stream later on today, count me in.

But why hold such an event at Furillen? Because Abba were Swedish, of course …

… but it turns out that there is another, more direct connection between Abba and the real  Furillen. I have unearthed a story from 2008 that Abba’s Björn Ulvaeus wanted to set up a recording studio on the island. He is reported to have said …

As I stood and gazed out over the sea to the east …then I knew I was in the right place.

This is very concrete evidence … of how attractive Gotland is for creative people.

According to this piece from 2013, the studio’s construction was set to go ahead …

Here, the music will be at the center. One wing is plotted on the sketch of the big studio. There is also a lounge and a place for living in a low building with a view of the ocean toward the sunrise.

No, I’m probably not interested anymore. That was then, and much water has flowed under the bridge.

The project fell through because of shore protection rules.

In any case, Furillen seems more suited to Agnetha Fältskog – erstwhile object of my own teenage dreams – who retired from public life and became something of a recluse more then two decades ago.

Her ‘disappearance’ generated the usual Garboesque myths and mysteries, but according to the singer herself when she ‘reappeared’ to release an album in 2013, Agnetha merely wanted to spend time with her family and her dogs.

I don’t know how to put this. Well actually I do.

If you could hear spandex, it would sound exactly like this …

Shall I upload it to Furillen’s music stream?

… nothing major, just a few tunes on auto deejay and some really bad costumes, such as these …

The best ones will be posted here.

Yesterday was Bowie day at Furillen. I streamed the following albums:

I will let the stream play on today, before reverting to the usual ambient music.

I had a fascinating time going through Bowie’s catalogue: the incredibly productive period in the 1970s, of course, but also some real gems from later on. Even supposed duds like Outside (1995) contain some great music.

As for Blackstar – the man’s style, in passing, leaves me speechless.

I also recommend this video, which is of David singing ‘Heroes’ at my favourite festival, Glastonbury, in 2000.