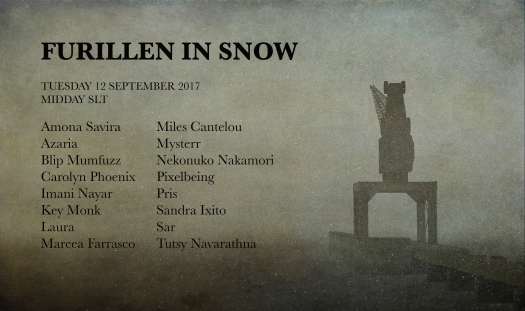 We are staging the latest group exhibition of Furillen pictures next week, with the opening of “Furillen in Snow” at Midday SLT on Tuesday 12 September. There are sixteen pictures in this exhibition, and to select them we searched right back to the earliest few weeks of the sim’s life, in late 2015.

Choosing from such a large pool was as fascinating as it was difficult. Please do not be offended if your picture has not been chosen – these group shows are not competitive in any way: it is simply a selection of pictures that we think work together quite well. Many of the pictures included in this show are from 2015-16, because we felt it would be interesting to look back on some ‘classics’.

We are also very pleased to include a picture taken at the sim by the late lamented Amona Savira. Amona took some very beautiful and striking pictures at Furillen, and although I barely knew her, I am surely not the only person who misses her distinctive and subtle photography.

In other news, the weather at Furillen is somewhat changeable as we move into September and Autumn – or Höst, in Swedish. While visitors may well encounter both rain and snow, the ‘default’ setting at the sim has been switched back to summer/spring – hence the emergence of more wildlife and some new trees, and the re-appearance of the swimming pool behind the hotel. Long-time visitors to the sim will know that the weather and windlight settings – and ground textures – switch around quite a bit, so arrive prepared for anything.

Finally … I mentioned a new sister sim a couple of weeks ago. This is progressing quite well, and will open reasonably soon.

Following the exhibition of pictures taken by visitors during the first month of Furillen City, the next show of visitors’ pictures will open on Sunday 4th June. Given that there are some terrific photographers involved, it will surprise nobody when I say that this is a really impressive collection …

The pictures span the period since the sim re-opened – following the Star Wars event that ran through the holiday period – with some important additions, such as the Hotel Fabriken and fishing village. Those new features of the sim appear in this collection – which is focused entirely on the ground part of the sim – alongside more familiar structures, such as the pier.

Thanks to everyone who has agreed to take part in this. Given the really high quality of the pictures in the Furillen Flickr group, it was tough narrowing it down. But we will surely hold more exhibitions on various themes that will enable some of the other great pictures of the sim – past and future! – to be featured.

Do come along to the opening if you have time, we’ll play a few tunes.

We are exhibiting a new collection of seven real life photographs taken by Laura – this Thursday in Gotham Warehouse, just off the city’s main square. It is called “Vagabonds” … 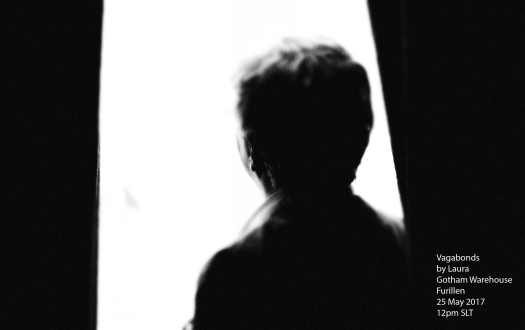 Laura has exhibited at Furillen a number of times, most memorably perhaps with Birds. This new collection follows a period during which she has rethought various aspects of her style. Whereas one of the most notable features of Laura’s photographs up to now has been the unusual angles she uses, the images in this new set are – to my eye, at least – fundamentally about place and time.

“Vagabond” literally means “a person who wanders from place to place without a home or job”, or “having no settled home”, and as you will see on Thursday, this spirit pervades the new set of photographs in quite a profound way.

I am not usually taken to flattery. This collection is outstanding.

We had a nice event at Furillen yesterday, launching the first exhibition at the new gallery in the city part of the sim …

Most of those who had their pictures included were able to show up, and it was enjoyable meeting some of you for the first time. What I really like about the show – which features images of Furillen City taken during its first month – is the sheer variety of pictures as well as photographers.

The city is not the easiest place to take photographs: there are no soft ‘gimme’ shots because the best angles are tricky to find, and the texture load means that those with ‘normal’ graphics cards are prone to crashing as they try to fix their shot. It’s also quite a complicated place to explore, as any city should be! So do visit the show if you haven’t done so, because the pictures on display here are terrific.

So … what’s next? The plan is to keep this show open for most of May, and then put on another show at the beginning of June – this time, of pictures taken on the ground part of the sim. We’ll keep things simple and just call it “Furillen is …”.

The Furillen Flickr group is huge, of course, with over 9700 pictures, of which the vast majority were taken on ground level – so how to select? I think we’ll stick to pictures of the latest iteration of the sim, which we called Furillen 3.0 and opened on 8 January 2017. It will still be tough pulling out 24 highlights from the many, many images of Furillen taken since then, but we’ll do our best. What’s guaranteed is that the quality will be very high indeed.

We’ll be making the selection around mid-May, so it isn’t too late to be included if you still have that killer shot in mind … or, perhaps, sitting on your hard drive.

So we’re done building Furillen City. For now. And as this great picture from Wurfi shows, it looks pretty good.

But of course, we never really finish. Just today, we added the art studio behind Cat Mews, filling in the last (lateral) ‘dead spot’ on the main sim platform at 3400 metres. We’ll surely add more, and tinker with what we have. But for now, that’s enough … and we hope you enjoy visiting this place as much we enjoyed building it.

Having spent most of the spare time I had during three rather intense weeks putting the city together, I must admit to feeling some trepidation when we opened two nights ago. This was mainly trepidation at suddenly having to share the space! But in fact, seeing people beginning to occupy the city, visiting some of my own favourite spots, and just hanging out on the streets – sitting and watching – brought genuine pleasure as everything started coming to life. Long may this continue.

Well … in the City itself, we’ll be taking advantage of the higher avatar limit by holding music events (including live events) and exhibitions at the various venues we’ve created. We have identified where the exhibition space will be, and there are at least four spaces where music events can – and will – be held. This starts on Tuesday, when there will be a batman-themed party – what else? – in one of the sewer rooms. So get out your costumes and avatars and come along. And actually, any superhero or comic book character will do – just bring whatever you have.

And watch this space for news of more events.

Meanwhile, having barely visited the ground at the sim for the past three weeks, we dropped down today and installed an old favourite from La Digue du Braek, Maison du pendu loon-plage, which I wrote about here. It means losing the ferry for a while, but nothing stands completely still … even at Furillen.

As promised last week, there is a new building at the sim. This rather large ‘utility shed’ – beautifully meshed by KT Syakumi – contains a silo tank, and is sited next to the shelter that was placed on the sim last week. We’ve done our best to situate both structures ‘in the spirit’ of the real Furillen, where they look like this …

I’ve put some placeholders where those benches should be, and will tweak everything over the next few weeks, but this addition really enhances the sim.

Next piece of news: we have an exhibition coming up, of real world photographs by my old friend Laura on the theme of birds …

This is a stunning collection of pictures, so do come and support Laura – and the sim’s gallery – on Monday when the exhibition opens.

Finally, finally … as I said earlier today in a notice issued inworld, the sim does not pay for itself. It is a labour of love, for sure, but sometimes … well, sometimes it feels a little that one or two visitors take its existence for granted.

Please don’t. If the sim closes again, it really won’t re-open. Given the quality of of the unique builds there – the awesome work of KT Syakumi and Megan Prumier – this would be a big loss for the grid. One less play at the gacha machine is all it takes to help …

To those who saw the notice earlier and stopped by to chip in – thank you.

Thank you to everyone who came to the opening of Ini Inaka @ Furillen – the sim was full for hours, apologies to those who didn’t get in. The exhibition will be open through August, so there is plenty of time to visit. 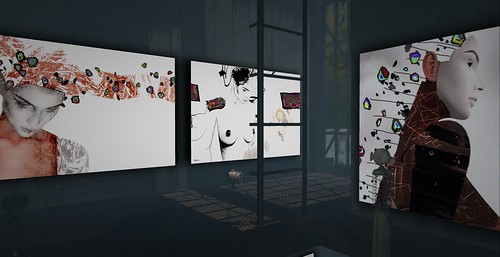 There is one more event coming up that you’ll need reminding of. Tomorrow, Wednesday 20 July, the ‘Furillen at its Best’ show closes at Imago. Here is the poster …

I’ll put another playlist together for this.

After the Pink Floyd event and Ini’s launch, Furillen will now go back to a quiet life. The snow has returned, and I’m deciding whether to leave it falling for the summer, when the janitor will be gone for several weeks. Not everyone loves the snow, but it’s how the sim started, and how most people will always remember it …

Furillen’s gallery will be hosting Ini Inaka for the next month or so, I’m a huge fan of her art and it works beautifully in this space. There are some brand new pieces in this collection.

There will be a gathering tomorrow at 1300 SLT to mark the opening. I’ll put a special playlist together.

The Pink Floyd event will be closing on Sunday – it was a genuine pleasure putting this together and I really enjoyed the pictures that were made by the many visitors who came by. Thanks, too, for making donations during the week that have enabled me to settle tier into September. Please keep donating, and keep the sim open.

We’ll be selecting the best of pictures from this event and making them into an exhibition – details will emerge in due course. There is still time to take pictures that could be included in this show – and go here for details of a picture challenge I issued earlier.

The Floyd @ Furillen exhibition will be on the lines of the “Furillen at its Best” show that has been hosted at Mareea Farrasco’s IMAGO gallery. This closes on Wednesday 20 July with a party …

As an event that really transformed the sim, Floyd @ Furillen will be tough to follow, but I have some ideas and will work on these later on this summer. I hope we’ll have one or two new buildings by then, too.

One very successful new building that was set up when the sim re-opened in June is the gallery situated on the sim’s southwest corner. So far this hosted shows by Laura and Gabrielle Swindlehurst, as well as an exhibition of Pink Floyd album covers.

The next show, opening imminently, will feature work by Ini Inaka. For me, Ini’s work speaks to some really personal questions in a very striking, distinctive and original way. So I’m very excited indeed to be hosting her work at Furillen.

Ini’s pieces will be for sale throughout the exhibition, which stays open until September.