Long-time visitors to Furillen might be excused for assuming that its owners are minimalist snobs … or geeks with childish obsessions like Star Wars and Batman … or that we have our ears tuned permanently to the depressing sounds of Radiohead. But nothing could be further from the truth. The sim is – always has been, always will be – a silent tribute to an event that detonated into the popular culture in 1977.

This was a momentous year on so many levels. Politically – Jimmy Carter was inaugurated as US President in January, Indira Gandhi resigned as Indian PM in March, Queen Elizabeth’s Silver Jubilee celebrations dominated the British summer, and Steve Biko died in September. Economically – the first Apple II computers went on sale, inflation stood at 6.5% in the US and a whopping 15.8% in the UK, you could buy a BMW320i for less than $8000 while a Barbie Road Trip with Motor Home, Dune Buggy and a Bicycle could be snapped up for just $72 (although sadly, these haven’t fared well in the vintage Barbie toys market). There was the famous and disturbing New York City Blackout in July. And of course, Elvis Presley died, on August 16 that same year. Or so some people allege …

But to us, one event stands above all of these for its lasting significance and impact on our lives and the lives of countless others. On 14 December 1977, cinema audiences watched in awe as the camera swept across Brooklyn Bridge, the Verrazano–Narrows Bridge, the B line subway train, until … finally … we saw these shoes …

Well, you can tell by the way I use my walk
I’m a woman’s man: no time to talk

… the camera panned up, and there he was, Tony Manero himself, and we could indeed ‘tell by the way he uses his walk’ …

… that life just got a whole lot better, that music got a whole lot richer, and that disco dancing will never be quite the same again. Because, let’s be absolutely honest, what’s not to love and admire – really – about the music of the Bee Gees …

All of which is simply a way of announcing that we’ll be staging our own tribute to Saturday Night Fever after 40 years, as the Iceberg Lounge gets the playlist it deserves, this coming Tuesday.

So … as you throw open those wardrobe doors and select your sequinned outfits for the celebrations, here it is, that four minute sequence that changed the world …

Furillen moved into a new region this week, so if you haven’t done so already, reset your landmarks to here. The move was simply a question of giving ourselves more scope to expand, with more prims to exploit (20,000, rather than 5,000), and for events, a higher avatar limit (100, rather than 20). Having ‘relaunched’ Furillen in early January with a major new layout including the hotel, fishing huts and pergola on the hill, I resisted the temptation to make further changes now. So the sim was simply replicated, and for a few days I had a the slightly bizarre experience of teleporting between two sims that were exactly the same … so much so that at once stage I began putting things back at the old sim, mistaking it for the new one.

There are, of course, some very small changes, but you’d need to have quite an eye for detail to spot them. No doubt somebody will!

The first priority is to close La Digue du Braek. I won’t be writing sad epitaphs for the sim, and we won’t be holding a ‘goodbye Digue’ party, as SLers are sometimes wont to do. Digue started quietly and it will end quietly (and we’ll be stealing bits of it for Furillen). The Flickr pool speaks for itself : well over a thousand pictures from 241 members in less than three months.

I always wondered about how the two sims would interact, and it was fascinating to watch. For a while we thought that Digue was going to overtake Furillen and it would be the latter that we’d have to close … but Furillen has an incredibly dedicated following, and for whatever reason the sim appears to draw in a steady stream of visitors who stay at the sim for long periods of time, day in day out. So when it came to deciding which sim to let go while we ‘re-allocate’ resources, it was a no brainer.

Furillen has changed a lot during the seventeen months of its life. It appeared quietly, with no big announcements, and grew partly because of the incredibly strong Flickr group – great photography is still a major feature of the sim, and the flow of pictures has never dried up. Then there have been popular (and, in their scale, quite unusual) events – weekends devoted to Bowie, Radiohead, and Pink Floyd when the entire sim was transformed, and the recent Star Wars rebuilds we staged over the winter vacation.

An important truth about these events was that I like building and designing sims best of all, so any excuse to rip things up and rebuild is welcome. I don’t see the point of having a sim and just letting it stand, unchanged …

There were photo competitions, parties, and a bar – all great fun, but they involved more work than I can realistically do given my real life commitments. So, more recently, Furillen has settled into just being itself, and I must say that I like it best this way.

Having said this, we all like to tinker and the sim will doubtless see more changes in the coming months, and – quite possibly – more events. We will see …

So once the last rites have been read and Digue has been closed, we’ll be messing about in the sky above Furillen and coming up with something that will enhance the sim as an interesting space to hang around, explore and enjoy art, culture and the company of others.

And if it sounds as though I haven’t much of a clue about exactly what we’re doing up there, you’d be absolutely right …

It seems that there are a lot Star Wars geeks on the grid – no surprise there. There have been plenty of visitors to Furillen-Hoth so far, many in costume, with one or two rezzing their own vehicles and flying around. I’ve seen quite a few people who haven’t been to the sim before, and it’s good to have some fresh faces around.

I thought it might be good to hold a gathering of the geeks. So welcome to the “younglings, younglings’ gather ’round” Furillen-Hoth Christmas party …

Star Wars costume is essential, of course. But given that there are so many great mesh Star Wars avatars and costumes around on marketplace, and that they are so inexpensive, this is as easy as it gets. We’ll stream some party music – good bits from the movies, of course (who can resist Cantina?) – but with a bit of inventiveness we can add some space-themed music from more familiar Furillen names, like Bowie and Radiohead.

The best pictures so far range from very funny spoofs to beautiful landscapes. Do keep them coming … 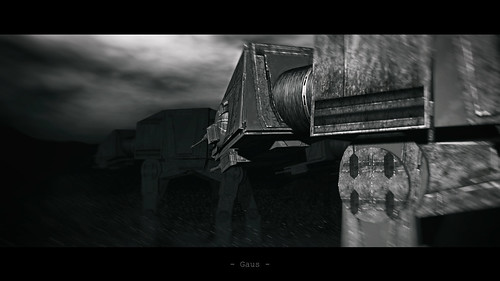 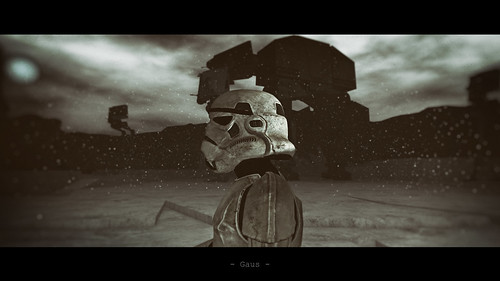 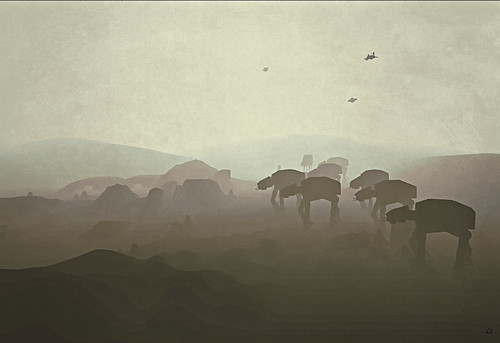 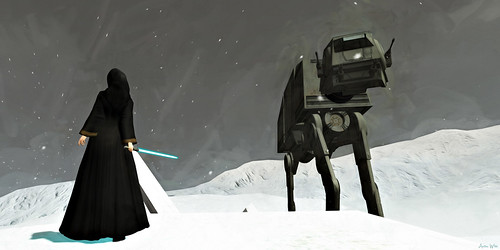 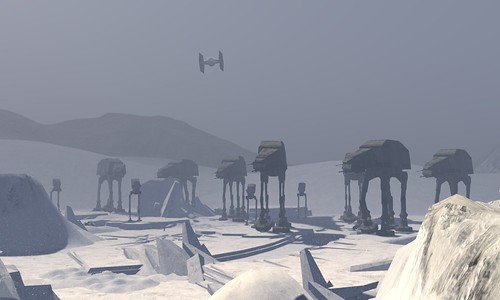 St. Paul and the Broken Bones (as good a soul band as you’ll hear) …

view from the hill …

Bowie on the big screens …

At some point tomorrow morning I’ll slip out of London and drive west – to Pilton, near Glastonbury in Somerset – through a maze of quiet back roads so that I avoid the traffic chaos that was making headlines today. Once there, I’ll be greeted by some fairly apocalyptic scenes, with early arrivals to this year’s Glastonbury Festival drowning – quite literally, in some cases – in mud caused by an unusually wet June. Scenes such as these, captured in pictures that were taken earlier today …

I’ll park the car, walk through mud and cow shit for about ninety minutes, and pitch my tent – high up above the festival site, near to my favourite stage, the John Peel Stage, which is the third or fourth biggest of the festival. Sigur Rós will be headlining this stage on Friday evening.

No matter how many times you have been to Glastonbury, nothing prepares you for its scale. Despite the sheer number of stages, music is really just a small part of what this festival is about. It began – and continues, where it can – as a quasi-utopian space in which there are as few rules as possible. For many years it was associated with CND, then Greenpeace, and these days supports a wide range of charities.

Besides music, the festival has massive fields dedicated to alternative lifestyles, leftfield politics, and various arts such as theatre, poetry and sculpture. There is a huge circus tent, a large series of deejay stages, silent discos, and legendary bars in a ‘naughty corner’ – or Shangri-La – in which free expression has been elevated to the status of an absolute value. If you spend your evening here, you can expect to be occupied until around 6am the next day.

As for the music, when you see this …

… it just takes your breath away. Every. Single. Time.

There is usually a sculpture mounted above this stage – Glastonbury’s main stage, known as the Pyramid. Last year is was this awesome CND clock …

This year the Pyramid stage will be topped by a sculpture of a lightning bolt, in memory of this man …

This is the first thing I will go to see tomorrow. In 2000, Bowie performed a set at the festival that has taken on a legendary status. The main musical action at Glastonbury won’t be starting until Friday, but at 1800 tomorrow, a huge crowd is expected to gather at the Pyramid to pay homage. The massive screens on either side of the stage will flicker into life, and Bowie’s set will be replayed in full.

I have seen this set several times (catch it here). But seeing it again at the very stage on which it was performed, and with such a large crowd, should be something very special indeed. Here he is, performing Heroes that day in 2000. Watch him speaking just before the song begins. Magical …

As for the rest of the festival, which runs until Sunday, I’ll see what I can post in terms of pictures and snippets of writing as I go along.

Mareea Farrasco has put together a really impressive collection of pictures that have been taken at Furillen since it first opened in October 2015. As you know, the sim has been blessed with an extraordinarily active and talented Flickr group, which now boasts over 6100 images in total.

Selecting from these wasn’t easy, but Mareea has done a great job.

The exhibition will be held at the IMAGO Art Gallery, starting with a party on Sunday 19 June at midday SLT. There will be a selection of music from past events at the sim, especially from Bowie, Radiohead, Abba, Prince, Grease and the disco night.

Talking of Radiohead, I have something small planned for this coming Friday, 17 June, at Furillen itself. Keep an eye out for details if you’re a Radiohead geek.

I was in Brixton today, and took in the Bowie mural, which is located right opposite the Tube station …