On Wednesday 5 February we will have the opening of ‘Furillen Impressions’, by Melusina Parkin. This will be the third exhibition of pictures at Furillen since it re-opened – following on from ‘Furillen in Motion’ by Pixelbeing, and ‘Composition of Furillen’ by nekonuko Nakamori – given by artists who have strong associations with the sim. As previously, the exhibition will consist of a set of fifteen images of Furillen. Selected from some 200 pictures that Melusina has taken at the sim over the years, this is a collection of old and new, with one or two of the images recalling features of the sim that I had long forgotten.

Melusina is a distinctive Second Life photographer whose pictures are unmistakeable. She has a sharp eye for detail, and on Flickr, often posts entire series of minimalist images that draw attention to specific themes and features of the sims she visits on her travels around the grid. Recently such themes have included ‘Magnificent Loneliness’, ‘Machinery’, and ‘Barriers’. I find this way of approaching photography in Second Life refreshing and unique, establishing strong and sometimes surprising visual connections between disparate sims. Thus although this particular collection of images have all been taken at Furillen, any one of them might be incorporated within a bigger series that brings it into visual connection with other places on the grid.

Always, Melusina’s pictures are characterized by a strong emphasis on form. She has a fine eye for geometry and composition. Many of her images are monochrome, re-affirming the sense of thematic unity between them. Thus when she does use colour, it is all the more striking, such as in this image … 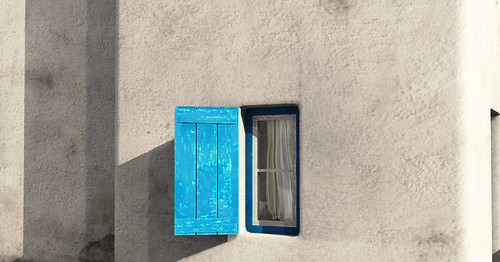 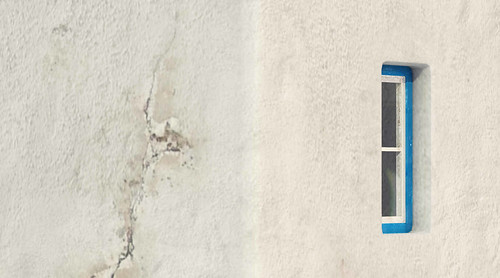 … wherein the flash of blue unifies the two images.

Given Melusina’s liking for abstractness, her pictures are well suited to Furillen, with its minimalist flavour and largely monochrome palette. At the same time, her pictures invite us to look again at some features of the sim, because typically, she draws out details that are often passed by and overlooked.

Melusina has been active in Second Life since 2008. Over time she has been a fashion manager, a journalist, a furniture creator, a builder, a decorator and a photographer. At this moment, she owns an Art Deco furniture shop called Melu Deco. About her approach to photography, she says …

Many of my photos tend towards minimalism, that’s my main inclination: catching a simple detail from daily life or usual landscapes, enhancing it, making it protagonist of mostly empty scenes. This reveals its meaning or can push the observer to give it her/his own. Minimalism stresses void, space, geometries: you can be confused by that, but you can also been led to meditate about what things are when they are out of the crowd. Some of my pictures go towards a surreal mood. It’s another way to look at the world by an unusual gaze: there’s no need to see winged horses or green sunsets to trespass the real: you can feel puzzled even by a line of streetlights in the mist or by a piano set on a streets crossing.

Melusina has been taking pictures of Furillen ever since it first opened in 2015. To my eye, her images capture much of the spirit in which the sim was designed. This is how she describes her relationship with Furillen …

When I discovered Furillen, a few days after its opening, I thought I would be at home there. The place did seem to me like the realization of all my best wishes: it recreated a real place in a very precise way, its landscape was the triumph of the minimalism, it mixed up signs of human activities – the industrial landscapes are one of my passions -, it matched even my bias for solitude and for calm and meditative moments.

The stunning landscape made me feel a part of the lonely nature that, with its fog, with its cold sky and sea, with its scattered trees,  dominated the few buildings, once abandoned and now turned to comfortable and pleasant meeting places.

So, I started taking photos and I didn’t stop doing that for years. When I got the honor to be invited to exhibit some pictures, I got worried: how could I select a dozen of photos, when my “Furillen” folder was full with hundreds images of the place? Moreover, I couldn’t resist to the temptation of taking even more pictures, trying to catch new details, new points of view, new atmospheres… The selection needed a very long time, every day I changed it and every day I added some pics to the series.

Then, when you’ll look at a photograph of this exhibit, consider that there are many others behind it, and that it’s just a fragment of the huge collection of corners, details and landscapes that I love of Furillen.

This is a terrific collection of pictures that show both the sim and its photographer at their very best. As with the two previous exhibitions, it’s great to be seeing these pictures laid out within the sim itself: in context, surrounded by what Walter Benjamin used to call the ‘aura’ of the place in which they were originally created. The exhibition opens on Wednesday 5 February at 1300 SLT – that’s 2200 CET. We won’t be throwing a party, but if you want to come along while Melusina herself is around to say hello, that’s when she can be found!