Having re-opened Furillen three weeks ago, I thought it would be good to bring back Bar Cafe Fabriken, which previous visitors to the sim might recall from spring 2016. The bar hosted a few events – some Blues nights, a beach party, and a tribute to Prince. I like the building a lot – it was put together by Micky Siamendes, who wrote a nice blog about it here. We made one or two changes this time around, and I think the ambience and decor – including this motley of chairs on the decking outside – suit Furillen quite well.

There are no grand plans for events, I am not the world’s greatest party organiser (or party goer, for that matter). But if any visitors want to take a turn as deejay, get in touch, you are more than welcome. Otherwise, we’ll host events as and when the mood takes us.

Furillen has always been a sim with connections to Second Life photography – not only through its large Flickr group, but also through a number of exhibitions that the sim has hosted over the years. The first, Shoot the Shooters, was held in 2016 and consisted of a series of portraits by Moon Edenbaum of various Second Life photographers. Instead of simply hanging the portraits as one would in a real gallery, we projected them onto a wall, one by one, in front of a ‘live’ audience of visitors. It made for an interesting experience.

Following Moon’s show, the sim hosted a number of other exhibitions, including some featuring real life photography – such as Birds, Vagabonds and Shadows and Reflections by Laura, and A Journey Around Gotland by Gabrielle Swindlehurst – as well as shows by Ini Inaka and Imani Nayar. In addition, there have been exhibitions of collections of pictures by visitors, such as Furillen in Snow.

When reviving Furillen a couple of weeks ago, I thought it might be interesting to bring some art back to the sim. And so it is that a new show opens today – a collection of fifteen pictures called Furillen in Motion, by PixelBeing. Known in-world as VictoriaVicks, PixelBeing has long been one of my favourite Second Life photographers; indeed she has taken pictures of many of the sims I have been involved with, always coming up with some striking and unusual ways of representing and exploring what has been built. She works almost exclusively in black and white, and her pictures are distinctive for the way they seem to show their subject in motion, as if caught within a mere slither of time – hence the title of this exhibition. I also like the way her pictures use highly unusual perspectives. I have often found myself having to guess exactly where on the sim a particular picture has been taken, as in this example from Rummu … 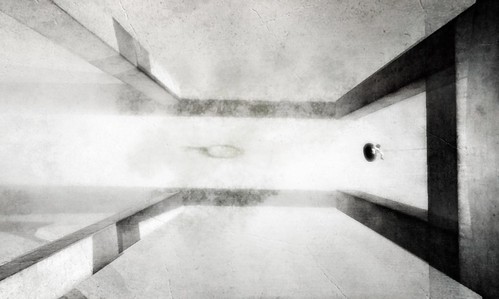 PixelBeing has been taking pictures in Second Life for around two years. When I asked her for a few words about her favoured style of photography, she told me this …

It was, as it is now, a catching moment, a tune, a feeling and a mood of that exact instant that covers the edit as it is for every person who snaps anything in or outside secondlife or so I think.

As for Furillen, it’s the only sim I can’t get enough of taking pictures of. It’s emptiness full of so many details always conquered my interest in it. I swear one day I will travel there to see it with my very own eyes live breathing in its air and will have a huge smile all the way around there.

There won’t be an opening party for this one, it’s simply there – right now – for visitors to walk around. Unlike other exhibitions at the sim, Furillen in Motion is located in the large concrete bunker (built by Megan Prumier) in the middle of the sim. We thought that these pictures – all taken during the two weeks since the sim re-opened – really suit that space.  I hope that you enjoy it.