Surely there are ghosts here, my children sprung
from these deeper furrows. 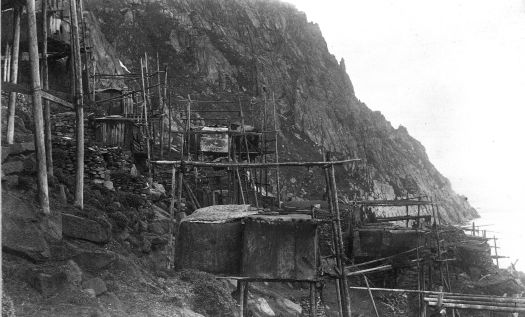 Our new sim, which opens today, is a recreation of the abandoned Alaskan village of Ukivok. The landmark is here. Once home to around 200 Iñupiat, the village is located on Ugiuvak, or King Island, which is situated in the Bering Sea, around 64km off the Alaskan coast and 145km from Nome.

This remarkable place is a stilt village, perched on the side of a 45º hill. The village has stood on this site since the late nineteenth century. It was abandoned around fifty years ago, but still stands today, looking as intriguing – and as unlikely – as ever … 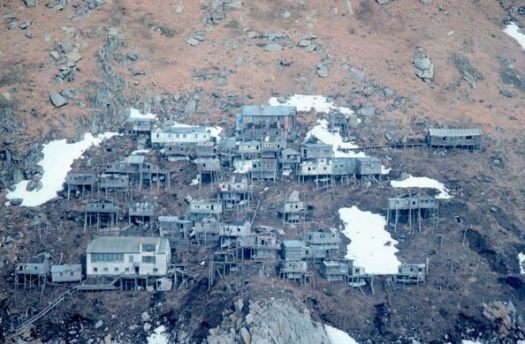 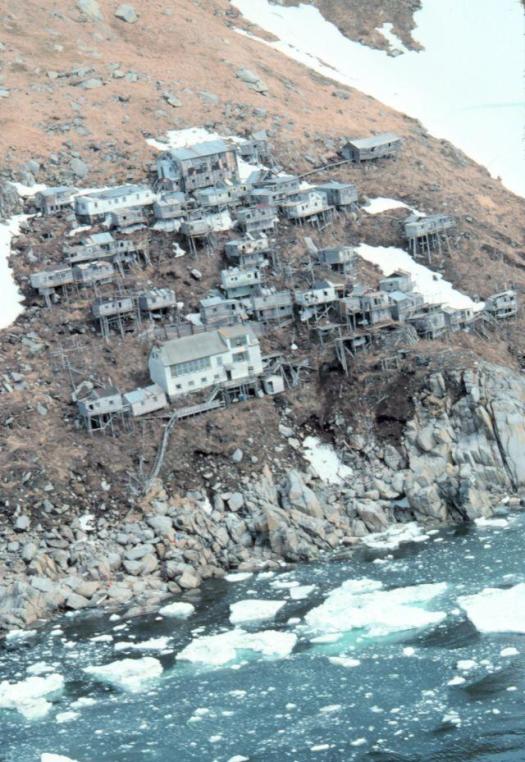 King Island, on which Ukivok is located, measures one mile (or 1.6km) across with steep slopes on every side.

Besides the stilt village, there are no other buildings on Ugiuvak.

As far as we know there is no beach to speak of on the island, making the passage from the sea to level land high up on the island quite impossible from most points. As this sketch by a sea captain suggests, Ukivok is a forbidding, seemingly uninhabitable place …

A distinctive feature on King Island is a group of rocks high up on the saddle of the island. These look like ruins of some kind – an Alaskan Stonehenge, perhaps? But in fact, they are completely natural … 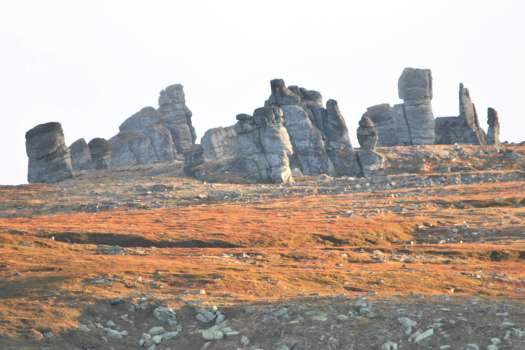 King Island is home to eleven bird species – something like 250,000 birds in total – most notably around 42,000 Parakeet Auklet. From a distance, it can appear quite mystical, especially when shrouded in mist … 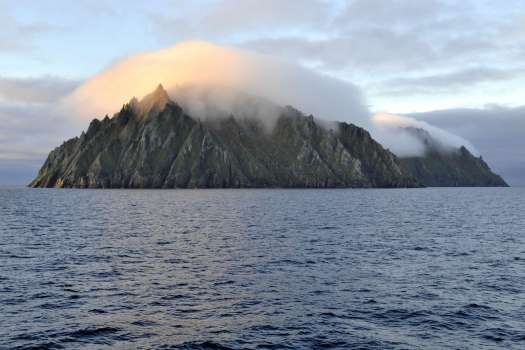 One can but wonder at the ingenuity it must have taken to build a village in such a place, and the resilience demanded of those who lived here. The Iñupiat inhabitants of Ukivok called themselves Aseuluk, ‘people of the sea’, or Ukivokmiut, ‘people of Ukivok’.

The Ukivokmiut were subsistence hunters and whalers who had lived on King Island for centuries. Their activities on and around the island included hunting for seals and walruses, crab fishing, and gathering bird eggs and other foods. 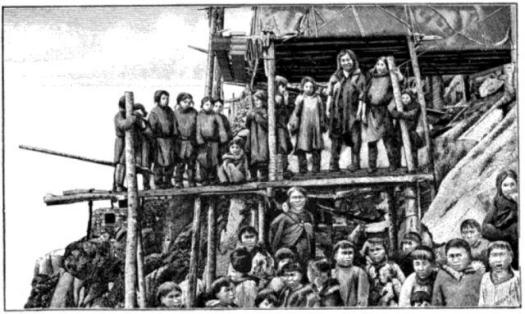 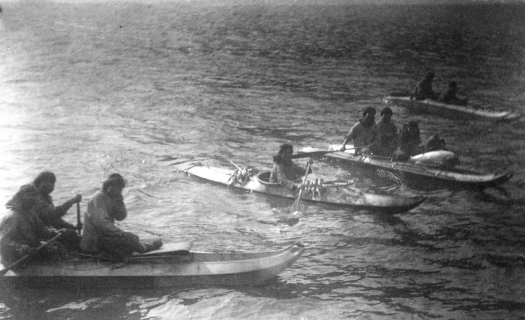 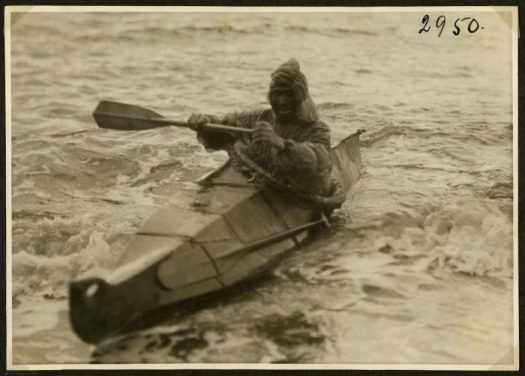 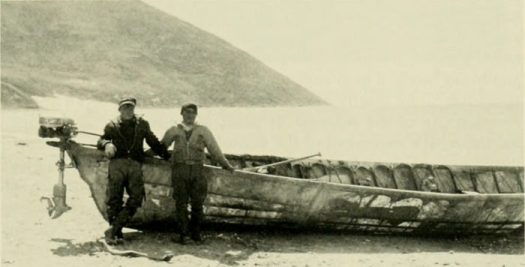 The Aseuluk built Ukivok on stilts because of the lack of sheltered flat ground on the island. Initially the village consisted of houses constructed from walrus-hide for the summer months, and stone for the winter. These were subsequently replaced with wooden buildings, which can still be seen on the island today. 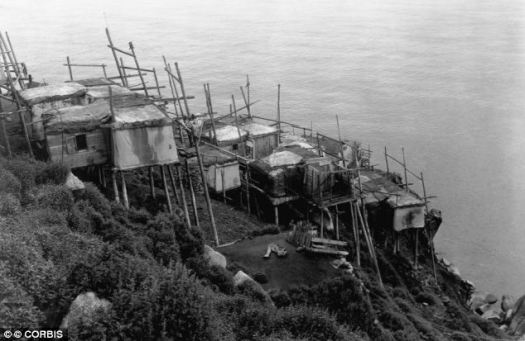 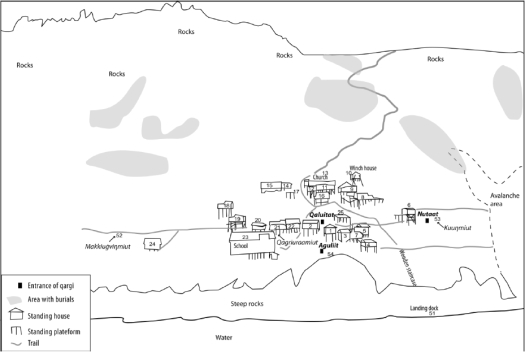 As this map shows, the Ukivokmiut also built a school and a church. They are the two largest buildings in this photograph … 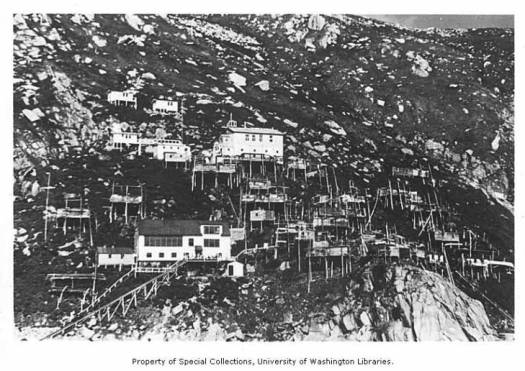 The church was dismantled during the mid 1980s because it was becoming dangerously unstable. We have retained both buildings in our reconstruction, albeit in what we imagine would be an appropriate state of disrepair. 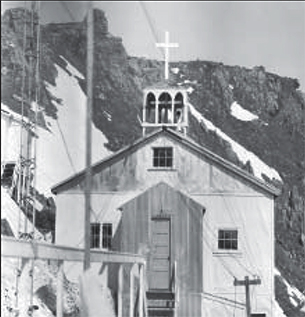 We were intrigued to discover that the Aseuluk were devout Catholics. A statue of Christ the King – which can be seen on the sim – stands high above the village, perched on top of 700 ft high cliffs …

At the top of the village itself, an old bell –  also included in our reconstruction – was used to call people to mass. The bell tower collapsed in 1974.

Ukivok’s school is central to the story of how the village came to be abandoned. Up until the middle of the twentieth century, the Ukivokmiut tended to spend winter on the island, and at least part of the summer in the mainland city of Nome, where they sold ivory carvings while camping on the beach …

During the winter months they spent their time in Ukivok. Because of limited daylight – only four hours per day during December and January – the islanders engaged in activities such as dancing, which was done in the so-called ‘Qagri’ (the men’s communal house). The month of December was known by the Ukivokmuit as ‘Sautugvik’, or the time of drumming.

The numbers of Ukivokmuit on King Island began to decline during the Second World War, when an outbreak of tuberculosis claimed many lives within the village. Others were lured away in search of jobs and better medical care on the mainland. But the crucial event that led to the eventual abandonment of Ukivok was the closure of the school. This was directed by the Bureau of Indian affairs, ostensibly due to fears of a rock slide that threatened to destroy the school house.

This devastated the village. Without children to help gather winter food, the elders and adults were forced to move to the mainland, and by 1970 King Island was completely depopulated, although some Ukivokmiut continued to make trips to the island during the summer months to maintain the buildings and hunt walrus and seal. Meanwhile, the boulder that had supposedly threatened the school’s existence has never moved, and the building still stands, albeit in a dilapidated condition. 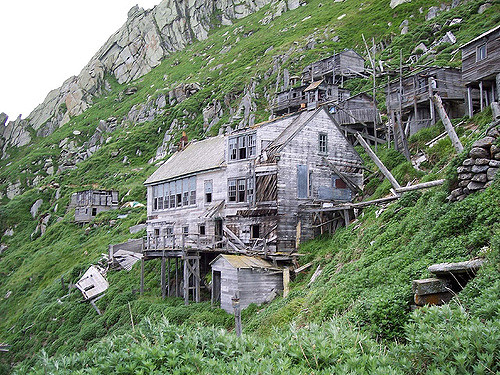 Although King Island has a lot of vegetation, there are few (if any) trees there. This raises an intriguing question: the Aseuluk built a stilt village on an island where wood is essentially lacking, so where did they find all that wood? According to this article, the village was mainly built out of a combination of driftwood and wood procured during trips to the mainland. Wood was hugely important to these people, as indicated by the rich terminology of wood types and expressions in their Inupiaq dialect …

Photographs suggest that the real King Island is incredibly ‘green’ during the summer months, and we have sought to reflect that in our reconstruction …

Although the village still stands, one wonders how much more difficult the life of the Aseuluk might be today in the face of climate change. In recent years, more and more of the ice in the sea around King Island has melted; indeed as this graphic shows, it almost disappeared completely in 2018 …

If the trend continues, the region’s ecology will be seriously destabilised, winter storms will be common and the capacity of the villagers to hunt would surely be diminished.

While researching the history of Ukivok, I was pleased to discover the poetry of Joan Naviyuk Kane, whose mother was an inhabitant of Ukivok. 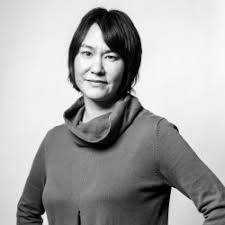 In 2015, Joan visited King Island – she gives a fascinating account of that visit here. 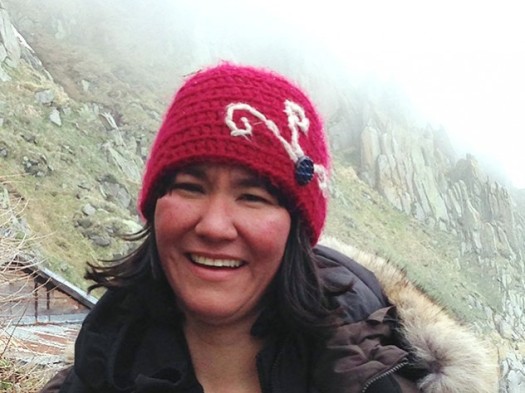 Joan’s 2016 poem, ‘Exceeding Beringia’, resonates powerfully with her experience of that trip …

This land with its laws that serve as wire
and root to draw us together. Sinew, snare,
the unseen growth of the green tree
many rivers south whose stump now shoals

into use. Through layer upon layer of land
submerged, of ice, of ash, through lakes
that cannot be the eyes of the earth.
The phreatomagmatic blue sprawl
of the Devil Mountain Maar, the Kuzitrun

drained by inland veins scrawling tributaries
with name upon vanishing name.
The giant granite tors at Serpentine:
Iyat, the cooking pot sentineled
by unscoured stone as it towers

endlessly into the flickering sky.
Auksruaq, like the blood that seeps
across such hot and dim and strenuous
times where one still cannot be serene:
red phalarope, might we follow,

leaving the meadow wet with tears?
From nest to fledge and then to move again
right out to sea, circling tight vortices
to upwell food. Let us lose our grief
in great rafts as we translate the renamed

straits. Our limbs, like yours, are burnt
and broken. Let us at last make noise
of this truth as we return together
to wear another furrow, to make portage,
to make our land our home anew.

Finally – and purely for fun – we have added a zipline. As the map above indicates, there was a winch house in the village, next to the church. This suggests that the islanders probably used a ropeway for transporting things between the village and the sea. We simply made ours longer and higher – and it’s intended for people, not things. After all, Alaska does boast of having the world’s longest zipline … albeit located some 2000km away from King Island, at Icy Strait Point …

In this spirit, we hope that you enjoy visiting the sim, and that you post your images in the Flickr group.

3 Replies to “Ukivok, and the People of the Sea”