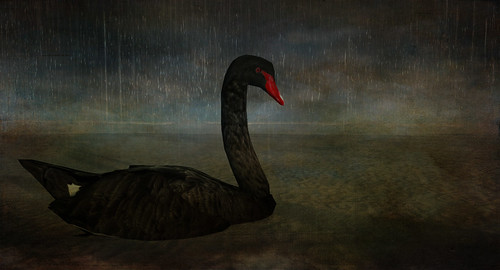 Black on flat water past the jonquil lawns
Riding, the black swan draws
A private chaos warbling in its wake,
Assuming, like a fourth dimension, splendor
That calls the child with white ideas of swans
Nearer to the green lake
Where every paradox means wonder.

Though the black swan’s arched neck is like
A question-mark on the lake,
The swan outlaws all possible questioning:
A think in itself, like love, like submarine
Disaster, or the first sound we wake;
And the swan-song it sings
Is the huge silence of the swan.

Illusion: the black swan knows how to break
Through expectation, beak
Aimed now at its own breast, now at its image,
And move across our lives, if the lake is life,
And by the gentlest turning of its neck
Transform, in time, time’s damage;
To less than a black plume, time’s grief.

Enchanter: the black swan has learned to enter
Sorrow’s lost secret center
Where like a maypole separate tragedies
Are wound about a tower of ribbons, and where
The central hollowness is that pure winter
That does not change but is
Always brilliant ice and air.

Always the black swan moves n the lake; always
The blond child stands to gaze
As the tall emblem pivots and rides out
To the opposite side, always. The child upon
The bank, hands full of difficult marvels, stays
Forever to cry aloud
In anguish: I love the black swan.