We had a great first day of the Bowie weekend yesterday. I’ll post some pictures tomorrow of some of the outfits people wore. There were some interesting and very creative choices. Even the janitor changed out of his usual boiler suit and bleached his hair for the occasion.

While the movies we had showing were popular, and the slide show of more than 200 pictures especially so, it was really all about Bowie’s music. There were more visitors to the stream than usual, and the average listening time shot up.

Starman got the highest number of listeners, while Heroes was also very popular – as, interestingly, was the song Bowie co-wrote with Eno, Warszawa. Joy Division originally called themselves “Warsaw” in honour of this song.

A request I wasn’t expecting was for This Is Not America. This was co-written by Bowie and a jazz fusion band called Pat Metheny Group, and was used for John Schlesinger’s 1985 movie, The Falcon and the Snowman.

Bowie didn’t perform it live until much later.

I came away from the day in awe of Bowie’s range. Nobody, in my view, comes close – he did everything, and most of it way ahead of his time.

In that spirit I wanted to share this – Bowie, appearing as the Lord Royal Highness in SpongeBob’s Atlantis Square Pantis in 2008. Apparently he became a SpongeBob fan through watching it with his daughter. Here is a picture of the character Bowie voiced – notice the eyes? 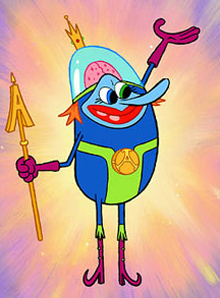 You can watch a clip from it here. Bowie also wrote a song for the upcoming Broadway show, The SpongeBob Musical. You couldn’t make it up …

I have spent quite a bit of time watching Bowie videos, reading about him and listening to his music while putting this Furillen event together. To be honest, after a while I stopped thinking about the event at all and just gathered material that I wanted to share.

What struck me more and more were his qualities as a human being: not only his genius and insight, but his humour and humility. Watch this video of a 1999 interview – where he says he doesn’t even know how to pronounce ‘Bowie’ – for evidence aplenty of what I mean:

What a beautiful man.

I’ll leave you with a video of the last single Bowie released during his lifetime. It is, of course, Valentine’s Day …